TripMyDream, Prometheus, Preply – a few years ago nobody knew about the existence of these Ukrainian startups, and now they have become successful companies and are actively conquering the Western market. But what to do when there is no money for your own project? If you have an idea and a team but no investment, then you can try to raise money from the crowdfunding platform. Today we will tell you about  top 5 Ukrainian startups that have raised the most money on Kickstarter and made their projects a reality. Ukrainian startup EnjoyTheWood has raised over $ 530,000 to produce 3D maps of the world from wood. This is their third company on Kickstarter and so far the most successful one. Previously, they have successfully completed fundraising campaigns for the creation of wooden world maps (over $ 50,000) and city maps ($ 100,000).

EnjoyTheWood is a Ukrainian family startup of Igor and Maryna Fostenko from Irpin. The company sells decorative wood products in 72 countries. For example, the price of one map starts at $ 35 and depends on size and style. The team currently employs 16 people, and throughout its existence, the startup has sold more than 20,000 maps worldwide. The company is actively developing and expanding its product range. The startup was founded by developers from Zaporizhia. They created the world’s first recycled cardboard camera and two retro-style lenses and launched a campaign on Kickstarter. Their invention created a real furor on the crowdfunding platform and raised more than $ 377,000 in investments from the $ 15,000 announced at the start. Thanks to colleagues from Ukrainian startup PetCube, they also started production in China, but later moved to their native Zaporizhia. Over  two years of the project existance, the cost of the camera has increased from $ 29 to $ 69. “We don’t just sell cameras, we create a community that enjoys vintage photography,”  write  the creators on project’s website. They have already created a site and app where shoppers can share photos and impressions. Ukrainian startup Concepter has twice appeared on Kickstarter with the iblazr project. Iblazr is an LED flashlight for mobile devices with Bluetooth synchronization. It was created by Ukrainian developers in Kyiv and mass-produced in China. Difference of the new iblazr 2 version from the first one is in form factor and improved lighting components. Therefore, the device can now be used to create photos not only with a smartphone or tablet, but also with a mirror camera. You can also control the light temperature and synchronize up to 10 flashlights with one click. In 29 days on Kickstarter, the iblazr 2 project raised $ 253,000 of the $ 70,000 planned, while the first version only made $ 156,789 of the $ 58,000. Now iblazr is on sale in the world’s largest retailers – Apple Store, Best Buy and Walmart, as well as in over 40 countries worldwide. The giant knitwear of Anna Marynenko from Kyiv very quickly captivated the Kickstarter users. Merino wool plaids and scarves are not made with knitting needles, but with hands and in 2015, the Ohhio brand raised more than $ 200,000 from the original goal of $ 20,000. Now, from a crowdfunding project, they have grown into an online store and ship their products around the world. The cost starts at $ 29 for a ball of yarn and from $ 900 for a large plaid. According to the founder of the startup, their company is more focused on the Western market – Europe, the US and Canada. In 30 days the project by Roman Landik from Kharkiv raised $ 185,000 from the starting $ 30,000.  Verum is an audiophile headphone with a unique, according to the creator, sound reproduction technology The idea for this startup came about a few years ago when Roman decided to turn his hobby of headphone designing into a money-making business. Before launching the company, the guy sent out working prototypes of headphones to professional reviewers and posted links to their reviews on his own site. Experts noted the sound quality, low cost and solid body of the device. The price of headphones still remains the same – $ 349, what makes them one of the cheapest in the professional line.

* Only those projects that have indicated their Ukrainian origin got in the top. 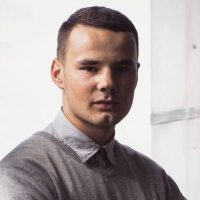